A Review of Saving Jason by E J Hanagan


Before I discovered free (and hugely discounted) eBooks, I could count on my hands how many times I started but didn’t finish a book. Since freebies, I’ve lost track. On the upside, I’ve discovered many new authors with amazing stories to tell. The trick is sorting the good from the bad. 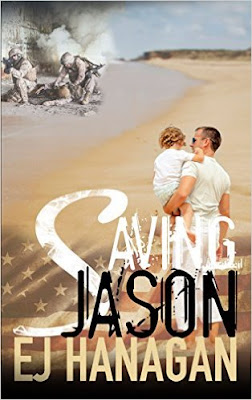 I always read reviews before downloading a book. While looking through my Kindle library this week, I stumbled upon Saving Jason by E J Hanagan—a book I had picked up back in 2014. (It’s now $3.99 for Kindle.) It promised to be “an emotionally-moving look at PTSD” and had a 4.17-star rating on Goodreads and a 4.8-star rating on Amazon. It was a story about a war veteran’s best friend/ex-wife and his current love interest, and the relationship that develops between them following his life-threatening accident. Sounded like a nice contrast to a sweet story I had just finished. I downloaded it to my iPad.

I struggled through 17% and then gave up. The next day, I logged into my Goodreads account to post a review. I thought it would be my very first one-star review. I had never posted a review unless it was at least a three-star. Momma always said, “If you can’t say something nice, don’t say anything.” I’ve since decided that doesn’t apply to book reviews. After all, many people base their purchasing decisions on reviews, and a lot of reviews come from friends and relatives of the author. Doesn’t seem fair to not give them an unbiased heads-up.

So anyway, I log on and skim the other reviews. They said things like ‘well written’ and ‘character development’. What were these reviewers thinking? Did I miss something? And then I did something out of character for me—I logged out, opened the book and continued reading, deciding to give it another go. I mean, almost fifty people LOVED this book. (True, there were over ninety great ratings, but I know many of the Goodreads’ reviews were duplicated on Amazon.)

I finished it. It wasn’t that great. It wasn’t even good. The biggest problem was the lack of editing.

First, I really missed having scene breaks. The chapters were divided up by the two POVs of the ex-wife and the girlfriend. That was it. No other division. No extra spacing or fancy curlicues. At one point, the author even changed scenes in mid-paragraph.

Hanagan’s descriptive writing was nice, however, it seemed when she had a several ways to say something, instead of picking the best, she used them all. Maybe that’s her personal style. It didn’t work for me. In a few places, she used the exact same words over a sentence or two later.

There were a number of spelling and grammar errors that should have been easily caught, as well.

As for character development, there was no real depth to the women. I didn’t dislike the women, but really didn’t feel anything for them except sympathy for their situation.

Most of all, it was a whole book of back-story. Don’t get me wrong—I love back-story. I have a problem controlling it in my own WIP! But this author has more back-story than front-story. What happens from day one (although, it takes place over a seven or eight-month period) to the end is about two chapters worth, if that. It’s all about their memories. I'd have enjoyed seeing a little more develop in the present day story—more showing and less telling. A young pregnant woman whose boyfriend is in a coma has a big area to explore.


Giving it a second chance did cause me to raise my rating to a two-star. I didn’t hate the book. I just didn’t like it. With more story development and some severe editing, this could be a really good book. It just wasn’t ready to market, in my opinion.

I wondered, while reading the book, if it was self-published. I checked and found it was published through Booktrope. I went to their website and found this:

I'm wondering if this book is an example of why...