When Through Deep Waters by Rachelle Dekker– A Review 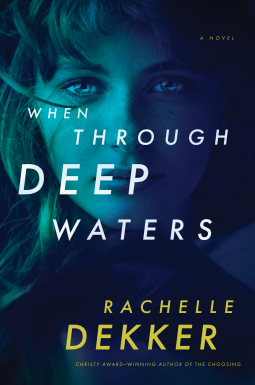 I’ve read a lot of books.
Few like this.

To say I was invested in this character is a gross understatement. This is the kind of investment for which authors strive. Alicen McCaffrey begins her story quite unlikeable. A self-absorbed well-to-do, shallow, detached . . . Alicen quickly became someone I felt deeply sorry for—not just sympathetic, but my heart broke for her as I shared in her unbearable grief and resulting sickness.

Having a brother with severe mental illness likely pulled me even stronger into this story. Witnessing his schizophrenia, it’s not hard to picture a non-existent world so real that you not only can touch it but be threatened by it—even to the point of death. Stay away if you are uncomfortable with a close-up story of grief and delusions. There were a few times early in where I wondered if this book would haunt me, leaving a scar on my sanity. Happy to say it didn’t. It just left a mark on my heart of a character so real I prayed she would make it through the darkness.

One minute I believed this was happening. A page later—no, it’s that. (Avoiding spoilers here.) The author is skilled at keeping me guessing throughout. The further I ventured, the harder it was to put down. I lost sleep. I love that about a book.

After finishing the last page (very late), my mind filled with tags: freaky, crazy, emotional, spiritually lifting, joy, grief, light, darkness, evil, goodness. Everything. Every emotion rolled into a very involved and evolving battle. I am desperate to forget everything about this book so that I can read it again with the same hope, fear, heartache, joy.

In other words, I really liked it. I give this book FIVE stars (because that’s the max.) I can’t wait to get my hands on another by this author. I guess I should ad that it’s well written and edited, and that the characters are well developed.

Available for pre-buy now, When Through Deep Waters releases on July 3.

I received a complimentary copy of this book from Tyndale House Publishers through NetGalley. Opinions expressed in this review are completely my own.

Formula of Deception by Carrie Stuart Parks – A Review 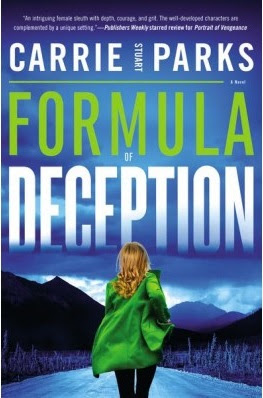 Murphy Anderson is looking for answers. She’s also running. From the past. From an escaped murderer. She’s changed her name, her looks, and her hometown. Will Kodiak, Alaska bring her the answers she seeks about her twin? Or will she be pulled into a dark mystery that threatens the thread holding her sanity?

As an artist, she is called to draw a ten-year-old crime scene from the memory of a dying man—a crime scene that has ties to secretive experiments of World War II. But soon, people involved in the investigation begin to die by not-so-natural causes.

I liked the unique storyline. The author has knowledge to sprinkle into the details to give it belief. The plot was thick with potential suspects. There were lots of twists and turns to keep the pace going.

I was sympathetic to the main character. I was also surprised by revelations about her personal story that eventually come to light. The ending tied everything up nicely.

I did find it a little difficult to keep track of the characters and the details in the beginning. This is a book you should read in chunks—not bits and pieces—or you risk getting lost.

I give this book four stars, and would read more by this author.

Available for pre-buy now, Formula of Deception releases on July 3, 2018.

I received a complimentary copy of this
book from Thomas Nelson through NetGalley.
Opinions expressed in this review are completely my own. 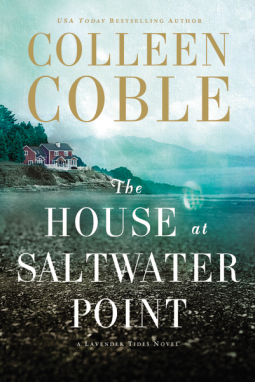