Review of The Guardian by Dee Henderson 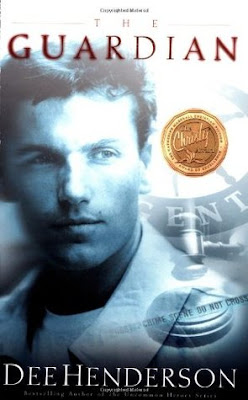 A judge on the short list for an appointment to the Supreme Court had been ruthlessly murdered, and there is only one witness—Shari Hanford.

U.S. Marshall Marcus O’Malley is intrigued by the woman he just met and makes a coffee date with her for the next morning. A short time later, he is helping to save the life of her brother and her father, after they are shot following the murder of Judge Carl Whitmore.

Henderson wrote a series of books about the O’Malley family. Marcus, the oldest, along with six other orphans have adopted each other, chosen their surname, and formed a family bond tighter than many biological families.

I’ll start with the cons. First of all, the family—the cast reads like that of a soap opera.  Sister Kate is a hostage negotiator, Lisa a forensic pathologist. Both have major roles to play, along with Kate’s boyfriend—FBI Agent Dave Richman, and Marcus’s partner Quinn, who happens to fancy sister Lisa. It was all a bit too convenient for me. I prefer the characters to be pulled together by the story, rather than have the story built around existing relationships.

There were a few little things that didn’t add up. For instance, the timeline when they flew from Kentucky to Montana. They were in flight and it was just after midnight. Then, they’re flying over the ranch and it’s daytime.  That’s one slow private jet! Little things like that jump out at me, but none were big enough to detract from the story.

The dialog wasn't exactly award winning. Not bad. Not great.Which is funny, because this book won The Christy Award.

There are many pros. The main character is a swoon-worthy, honest-to-goodness hero who puts his life on the line for those he cares about. The witness isn’t a helpless damsel in distress; she is intelligent, driven, strong, and quite likable.

The tension is as high as the stakes as they try to protect their only witness to the murder. There were many high-action scenes to keep the situation urgent. The settings are detailed and varied, from a large hotel, to a lake-view cabin, to an isolated ranch in Montana. The plot details were well thought out, and the pace was steady throughout.

I wish Henderson would have let the ending evolve a little more slowly, but it satisfied. There was no resolution to a side story about Marcus’s sister Jennifer, but it didn’t require one. Perhaps that storyline carries into another book in the series.

The O’Malley family is worthy of a series; they are a fun and interestingly eclectic group of people. I enjoyed this book and would read another in this series.
Posted by Lillian Robinson on May 30, 2016