Broadening My Horizons - Review of Paranormalcy 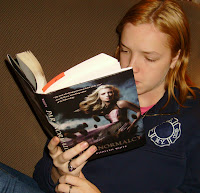 If you read my last post, you know that I gave my oldest granddaughter a signed copy of Paranormalcy for Christmas.  Dani started reading it immediately, and was finished in a day! She called it one of the best books she's ever read.  That's sayin' a lot, coming from my little bookworm!

I wanted to read it, too.  When I asked her where it was, she inquired, "Um... are you a fast reader?  I mean, I really want to take it home with me."  Well, hmph!  I grabbed the book as the clock began ticking...

Here is the profile pic of Kiersten White I grabbed from her blog page, Kiersten Writes.  I had thoughts of interviewing Kiersten for this post, but alas, she is off preparing to write the third and final book of the trilogy, and so posted that she is no longer available for interviews.  Understandable.

Even though I normally don't read much YA paranormal stuff, I wanted to read this book.  Not only had I followed Kiersten's career, and read with excitement when the she got the three-book deal, but I love her style of writing on the blog.  Her sense of humor is delightful.  I had no idea how that personality would show up on the printed page.


But it did!  Delightfully so!    Kiersten's imagination matches her wit.  She has invented such lively, original characters in this novel - not the typical dark, sullen types of other books in this genre.  Even though I never read the Twilight series, I had seen a couple of the movies with my granddaughters.  The characters in Kiersten's book do not compare... or should I say Twilight does not compare with Paranormalcy.  (No offense meant... just sayin'.)  Evie, the main character of the book, does not fall head over heels for the vampire!  Nor does she fear them...  (except for the one time when she burst into that room!)  In fact, she detests...  (bites lip)  Well, I don't want to spoil it for you.  Trust me.  It's not the typical vampire novel.  Not at all!

I don't want to discourage any Twilight fans from reading this book.  Dani is a HUGE Twilight fan.  She faints at the thought of Edward...  Well, maybe that's an exageration, but not much.  Anyway, any YA paranormal fan will find this book fantastic.  I just think it has appeal beyond the normal audience.

From the first page to the last, the dialog and action kept me turning pages.  I couldn't put it down.  I'm sure that while writing this novel, Kiersten didn't have a mid-50s audience in mind, but hey, I loved it!  I'm sure I'll love the movie, too.  (No, I don't have any breaking news on that front... again, just sayin'.)

Bottom line:  Two thumbs up.  Read the book!  Whether or not you're a vampire fan.  There's a reason that this debut author made the NYT Best Seller's List.  It's a very easy and enjoyable read.  I'm looking forward to book two around September of this year.

NICE. This book is doubly on my list, now. I've read Kiersten's blog, and that's cool her lively personality translates into vivid characters and an exciting plot. Can't wait to read it!

Lily...thank you for your lovely comment on my blog. I loved clicking through both your blogs to get to know you...and it has been wonderful. I am excited for you and your writing endeavors and cannot wait to hear more. :)

Hi Lily, my one and only grandchild will be…gasp…20 next month. Hard to believe, but true. Every Christmas of her life I've given her books and when she became a teenage I would choose a few and include a gift card so you could make some choices of her own. She loves the feel of paper in her hands and enjoys turning the pages, but has recently expressed an interest in an e-reader. I think this mostly comes from helping me move several times in the last year and doing the heavy lifting.

Except for a few treasures, I finally donated my entire collection of books to the Salvation Army in November. I was torn as I made the drive, but knew I had made the right decision when the volunteers were thrilled with what I brought. The oohs and ahhs as they helped me unload my car (and there were hundreds and hundreds) made me realize that books I had enjoyed so much would now be passed on to others who are passionate about reading.

I had to laugh when you wrote that you weren't sure if the author had a mid-50s audience in mind. I didn't read the Twilight books, but my cousin and three of her friends have read every single one and are always there when the movies open. I spent the weekend with her and we realized that this July we will turn…gasp again…60! I've forwarded the information on Paranormalcy, I'm sure she'll love to add a new author to her list.

I'm happy to see you back with us a bit more, I know how it goes with life and blogging and I'm trying to re-focus my blogging efforts. Blogging brings me much joy and many fabulous friends — like you!

Well, then, I must move it to the top of my TBR list. Thanks for sharing your thoughts on it.

I loved Paranormalcy too! Can't wait for the sequel!