I Finished My Book!

Oh, I wish it was that one!  No, I just finished reading The Appeal by John Grisham. 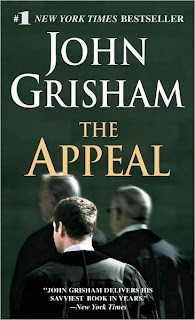 I needed a break from my WIP.  I had to get my mind off it for a bit.  I didn't like the last chapter I wrote and thought taking a break would help me regain my focus on where I really want it to go.  I want to pick it up again with a fresh mind.

I'm one of those people that don't typically follow authors, but Grisham is my favorite.  The only other author I can think of, that I actually own more than one book written by them, is Samuel Clemons.  I have three by Clemons that I was given when I was young.  I own a whole shelf of Grisham's work.

As I closed the back cover of this one, I thought about whether or not I am at all influenced by his writing.  My first reaction is, of course not...  My story ideas are nothing like his.  My writing style is far different.  I do admire that he manages to write stacks of best-sellers without filling them full of trash talk.  I'm not big on the foul language found in a lot of books.  I really like that his books aren't all about happy endings.  They're more true to life.  I also like the fact that, even though the majority of his books deal with some angle on the legal profession, he throws in a few unexpected storylines... even a little comedy.

Still I wonder...  Perhaps when I'm done writing this ms, I'll ponder the question again as I evaluate my characters and flow.  If I do find a similarity in style, is it necessarily influence?  Maybe I like his writing because of that common thread, instead of his writing being the cause of it.  If you were to ask me what writer I thought influenced me the most, my answer would be, "I have no idea."   I have been writing essays, songs and poems since I was a child.  It's hard to say what might have influenced my style.

How about you?  Is there a particular author that influences your writing style?  Describe the way your work reflects that influence.
Posted by Lillian Robinson on November 03, 2009

Yes presently I am reading "Her Fearful Symmetry" by Audrey Niffenegger. She makes me cry, laugh, mad and other emotions. I like her books so much that I don't want to stop reading. Like now, I have to catch up with all the blogs. I am almost finish! The story is very romantic and creepy.

My writing style is very much my own when it comes to my copywriting work. I try to just write exactly the way I talk. When I finally take the plunge and start a book (one day!) I do worry about being influenced by other authors. When I'm in the middle of a good book, I find myself thinking in the author's "voice." I might end up writing with a British accent! haha

I'm the same way, Lily. I can't say that any particular author has had more influence on me than any other. I think you are right, though. I think we feel a connection because of the common love of writing.

Hi! I had quite a time with my blog. Will come and read this post later.

By the way, please visit my blog. There's a surprise waiting for you!

LOL! You sure grabbed my attention with that title. :)

I'm reading Jane Fitzpatrick's book, "No Eye Can See." I love her characters and how she makes ordinary life experiences a time to reflect. I think she's influenced me in the area of inner dialogue.

Like Susan I thought you had finished YOUR book! lol

I haven't read Grisham yet ... though I do have a book of his on my shelf. I keep getting side tracked - Hey! I read a lot of books. Because of your post his book has now been placed next in line.: Its 'A Painted House.'

Keep plodding on with your novel, you know you will get there in the end.

I love Grisham also, I have most of his books I think, I may have more Stephen King, not sure. (I'm not a big horror reader, I think Stephen writes well though).
I think we are influenced in our writing by what we read but also by how we interpret it as individuals which is influenced by our environment and emotional experiences. In other words everyone is a influenced individual which is probably a contradiction in terms.