Our House by Louise Candlish – A Review 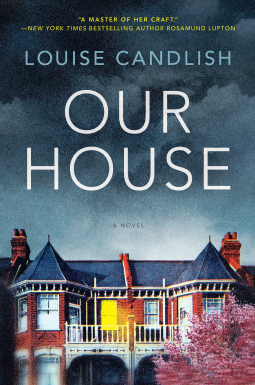 Fiona Lawson’s fairy-tale life comes to a screeching halt in this story of betrayal and fraud. She returns home to find it isn’t hers anymore. Her house in the exclusive neighborhood—the one she shares with her estranged husband in a co-parenting arrangement—now belongs to someone else. And they claim she sold it to them!

This story is written in a unique contemporary style, with the MC telling a lot of the story via a podcast titled The Victim, complete with the typical twitter comments following each episode. A sign of the times? Add that to the Word document/suicide note penned by the estranged spouse, along with conventional chapters having POVs of the MC and of her husband, and you get quite an interesting read. Can’t say if I’d like to read this style a lot, but it was certainly fun.

The story centers around an unfaithful husband and his traffic citations. You read that right. Somehow this author manages to take a mundane topic like a speeding ticket and turn it into a full-length suspense that held my interest to the very “OMG” ending! And I mean that literally. The last three paragraphs of the book floored me! I can’t tell you the emotion I was feeling without spoiling the last twist, so I’ll just say, “Wow.”

There were places in the story where I thought it seemed a bit far-fetched, but then the author threw in a little back-story to make me buy it. Many of the twists and turns (and there were plenty) knocked me for a loop! I loved the way Candlish exposed the different characters’ motivations as the story unfolded.

The characters were developed, and the pace was good.

This is a British novel, not my favorite, but I tried to ignore that in my rating. I also tried to ignore the foul language. It’s hard to say if it was excessive. There was a lot, but it was true to character in those places. Structurally, I wasn’t crazy about the writing.

I struggled with how to rate this one but ended up giving Our House 4 stars (with an asterisk for language and content) because I really did enjoy reading it. Three didn’t seem like enough, and the ending alone was worth at least an extra half.

I received a complimentary copy of this book from
Berkley Publishing Group via NetGalley.
Opinions expressed in this review are completely my own.
Posted by Lillian Robinson on July 03, 2018