Review of When Mockingbirds Sing by Billy Coffey


I read this book on the recommendation of an author friend. “His writing is amazing. I would love to be able to write like him.” That was enough of an endorsement for me to buy the book.

It didn’t take me long to see what she meant. His descriptive writing is heavenly, painting a perfectly detailed portrait of each scene. The story ran along at a very nice pace, except for a few brief spots I’ll mention later. 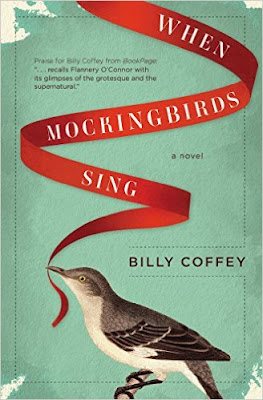 What marks the boundary between a miracle from God and the imagination of a child?

Leah is a child from Away, isolated from her peers because of her stutter. But then she begins painting scenes that are epic in scope, brilliant in detail, and suffused with rich, prophetic imagery. When the event foreshadowed in the first painting dramatically comes true, the town of Mattingly takes notice.

Leah attributes her ability to foretell the future to an invisible friend she calls the Rainbow Man. Some of the townsfolk are enchanted with her. Others fear her. But there is one thing they all agree on—there is no such thing as the Rainbow Man.

I quickly fell in love with the main character, nine-year-old Leah. One reviewer was irritated by the young girl’s stuttering. Hint: don’t read the stutter. I found it only added to the charm of her character. Her new best friend Allie is equally delightful, as well as Barney, a has-been toy-maker/shopkeeper with an ailing wife whom he deeply loves.

The original story line was equally entertaining and suspenseful. Is Leah hearing a messenger from the Lord? Or is her imagination getting the best of her? Either way, it makes it hard for her family to blend into their new hometown. The local church body is having a really hard time with the whole “love thy neighbor” thing.

The story alludes to an earlier incident involving another resident of the small town being “touched by the magic,” but that major clue is left unresolved. I really wanted to know what it was all about. (-1/2 star)

The author really loves to use parentheses (you know—these little curved thingies) in a lot of sentences.  I would have liked them to have been a little less (or maybe a lot less) of an occurrence. In many places, (though I don’t have a tally of the number of places the author chose to use them) they interrupted the pace a bit. I don’t like to get to the end of a sentence only to forget (mostly because my brain is getting older) what the beginning of the sentence said. I think you get my point. I know it’s a style thing, but it’s a bit overdone. (-1/2 star)

Skimming a few one-star reviews, I noticed a few people slamming the theology. This is fiction. And it has a very good lesson I hope most readers catch. A few reviewers criticized this book for the inspirational aspect. This IS inspirational fiction.

Overall, I really liked this book and will definitely read more from this author.

Do you read the low-rated reviews before buying a book?
How much importance do you give them?
Posted by Lillian Robinson on July 04, 2016

Sounds interesting! (and yes I can see how the parentheses could be annoying) (very annoying) :p